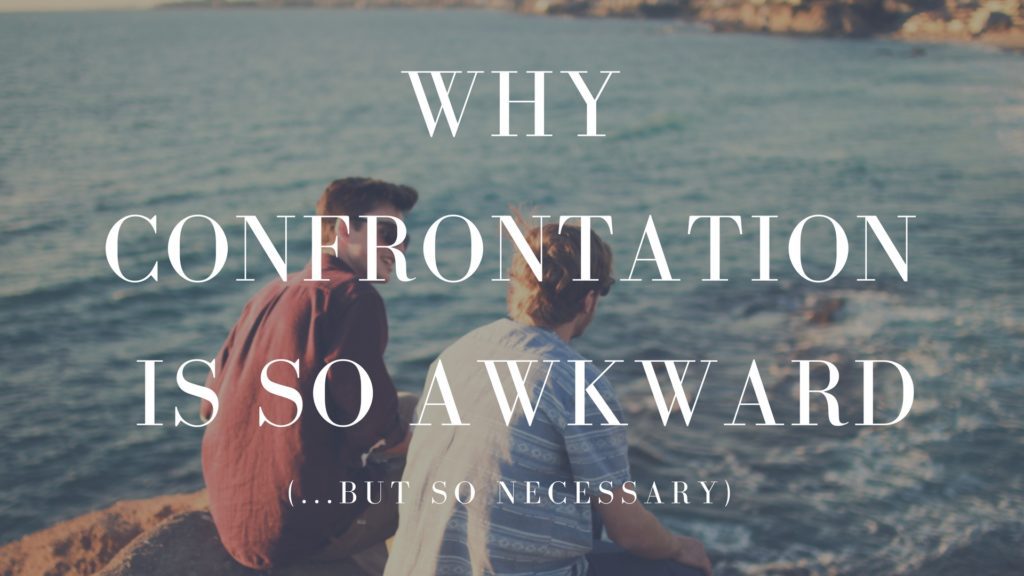 Why Confrontation Is So Awkward (but so necessary)

Even the word itself sounds uptight and frustrating.  The type of fear that comes with the idea of confrontation is hard to explain.  You know you need to talk to one of your friends about a conflict that has been going on, and you know that talking it through would be the right thing to do… but it’s too scary.  “Maybe someone else will talk to them,” you tell yourself.  Only to find that you’re faced with the same issue over and over.  Why is it so difficult to confront?  Why do we hate these types of conversations so much?  I’m glad you asked!  Confrontation is a struggle.  I can relate to those feelings of fear and dread.  As I’ve been forced to learn the art of confrontation, I’ve learned a few things that I hope and pray will be helpful to you.

You’re walking through the halls of your high school, going about your business when all of a sudden one of your best friends pulls you aside to lovingly chat about some sin she sees in your life.  You have a nice conversation, talk through scripture, admit your sin, and end in prayer. Totally normal, right? Wrong.
I don’t know about you, but this NEVER happened to me in high school.  Why? Because it’s not normal.  We live in a world where living up to your own standard is praised.  If you’re living up to your own standard, then who dare tell you that they’ve seen any trace of weakness in your life?! Anything other than “being accepted for exactly who I am” is an obscure concept to most of us. [x_blockquote type=”left”] Anything other than “being accepted for exactly who I am” is an obscure concept to most of us.[/x_blockquote]
I like being right.  I like knowing what I’m doing.  In essence, I like being my own god.  There is nothing in me that enjoys being told that I have messed up.  Therefore, we’ve shied away from living according to a standard, and we’ve chosen to build little lives of “me-control.”  The idea of God having control of our lives seems like some stiff religious practice.  We’ve found it to be much easier to make our own rules.  It’s not surprising that through this process, we’ve cut out the idea of confrontation.  “Me-control” doesn’t require confrontation.  “Me-control” only requires me to answer to myself, and as long as I’m answering to myself, I’m happy.   With that said, you’ve probably never viewed confrontation as a way to love people.  Maybe you’ve even seen it as something rude or unacceptable.  It doesn’t really feel like love in the moment when your bestie confronts you, but the Bible clearly states confrontation is a way for us to show love!  1 Thessalonians 5:14 says: “And we exhort you, brothers:  warn those who are irresponsible,  comfort the discouraged, help the weak, be patient  with everyone.”  The writer of 1 Thessalonians is telling us to do these four things out of love for each other.  Comforting people who are discouraged sounds like love, helping the weak and being patient sounds like love, but warning the irresponsible?  That just sounds awkward.
[x_blockquote type=”left”] We cannot say that we truly love our brothers and sisters if we are okay with letting them walk in sin without confronting them with truth. [/x_blockquote]

That’s what confrontation is!  Confrontation happens when we bring biblical truth to someone’s attention to help them change and be more like Christ.  The idea of warning someone who is irresponsible (confronting) is just as loving as offering them patience or comfort.  This is why it’s dangerous to stay inside the mold of our culture’s “me-control.”  We cannot say that we truly love our brothers and sisters if we are okay with letting them walk in sin without confronting them with truth.  Christ wants to use us to bring truth and love into the world of “me-control.”  Are you ready and willing to be obedient to Christ in this way?

If you know that you have sought to be faithful, then the person you’ve confronted must stand before the Lord for their own actions.  The Lord has encouraged my heart over and over again with Proverbs 16:1 “The plans of the heart belong to man, but the answer of the tongue is from the Lord.”  This means that I can plan the exact words I want to say in my confrontation conversation, yet at the end of the day, I have to trust the Lord to give me His words.  It is His truth we are seeking to proclaim!  This doesn’t give us an excuse to say whatever comes to mind without previous thought or prayer, but if you’ve surrendered to the Lord and sought for His will to be done, you can trust Him!
Don’t forget that your pride can also show its ugly head in the midst of confrontation.  Do you want to confront because you care about that person,  or because you want to be right about a situation? This is why Matthew 7 exhorts us to watch out for the logs in our own eyes (the sin that is in our own hearts).  Ask the Lord to bring your sin to light so that your heart is in a place of humility before you confront others, and trust Him!  He’s the one that does that work in your friend’s heart anyway.

Let me share with you one more passage of scripture that I’ve been LOVING recently.  Tracking back to our 2 Corinthians 5 passage, Paul says in verse 16: “ From now on, therefore, we regard no one according to the flesh.”  He’s prompting us to look at our brothers and sisters no longer from the viewpoint of who they are in their sin at this moment, but rather for who they can be in Christ!  Verse 17 says “Therefore, if anyone is in Christ, he is a new creation. The old has passed away; behold, the new has come.”  This has been so freeing to me in the context of confrontation. I might be seeing sin issues in other people’s lives that are discouraging, yet IN CHRIST this person is kind, patient, humble, loving, joyful and so much more.  If they allow Christ to work in their lives, the Holy Spirit will transform them from one who walks according to the flesh, to one who walks in truth.  In Christ, there is freedom from “me-control.”  In Christ, we are entirely new beings.  This freedom beckons our hearts to confront in love and grace. [x_blockquote type=”left”]We speak truth with the motivation of desiring our brothers and sisters to flourish in their Christlikeness.[/x_blockquote]

When we can look at our brothers and sisters for who they are in Christ, we can be excited for how the Lord will change them from this point forward.  We also remember that our own hearts are in need of patience from others as we too are still in the process of becoming like Jesus.  This is how we confront with grace: We remember that the gospel has proclaimed us, and our brothers and sisters, as new.  We speak truth with the motivation of desiring our brothers and sisters to flourish in their Christlikeness.  We don’t regard them according to their flesh, but we also don’t stand-by while they comfortably sit in their sin.  We rejoice that the Lord is shaping them, just as He is shaping us, and we unify together with the same goal; to be like our Savior (Eph 4:24).

So What Do We Do Next?

Let’s get personal. It’s time to swim upstream a bit here.  What situation comes to mind when you think of confrontation?  Is there a person you need to have a chat with?  I know it’s awkward.  I know conflict is scary.  The real question is, do you trust the Lord to be in control as you seek to be obedient to Him?  There might be an awkward silence, and yes, you may potentially be met by someone’s ugly pride (or be faced with your own).  This is bigger than our fears and frustrations. This is laying down your life for your brothers and sisters.  This is loving people.

3 thoughts on “Why Confrontation Is So Awkward (but so necessary)”