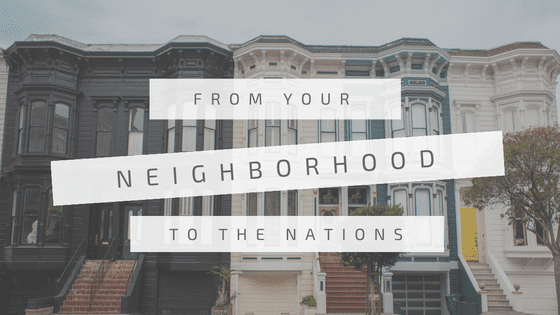 From Your Neighborhood to the Nations: Understanding How to Extend Our Influence

About the Author:
Randy Curtis is a Bible Institute alumni (2006). Following his time as a student he joined the maintenance staff for one year, then was asked to work in Student Life as a Discipleship Coordinator for three years, which was a dream job. After marrying Kylie in 2012, they moved to Michigan for two years before returning to the Bible Institute in 2014 to be the Dean of Men- a role he has held for three years. Randy also leads mission trips for Word of Life with high school and college students. He and Kylie have a seven-month-old daughter named Alivianna and she is the apple of his eye! He enjoys sports, reading, movies, and eating breakfast food at any and all times of the day.
Picture the following scenario: An 18-year-old guy (we’ll call him Andrew), who is one of the leaders in his youth group and desires to serve the Lord vocationally for the rest of his life, is trying to decide what his next step in life will be. Bible College? Community college? State university? Andrew is growing in his understanding of the fact that God wants the Gospel to go to the ends of the earth and consequently, he is wondering if cross-cultural missions will end up being the route he pursues. However, he also sees the obvious need around him in his hometown, and therefore he is considering youth ministry in his home church.
Wisely, he begins asking a few trusted mentors in his life to help him discern what kind of training he should get. One man says, “Can’t you see that America is messed up enough and only getting worse! Why would you ever go anywhere else?!” Another man says, “America has plenty of access to the gospel already. You can’t stay here! You have to go to those who have never heard!” Now more confused than ever, Andrew is paralyzed with indecision. He doesn’t know which perspective is right, if any, or who to believe.
Perhaps you know someone in Andrew’s shoes. Or perhaps you ARE Andrew. How should we think through a decision like this? Thankfully, God does not require us to choose between these two extremes! In Acts 1:8, we see the proper way to process and prioritize our outreach to the world around us.

When Jesus told the disciples that they would be His witnesses in Acts 1:8, He started with their immediate context. In other words, He said their witness for Him would begin in the place He told them to be – Jerusalem (Acts 1:4). Jerusalem, essentially was their “ministry hub” for that part of their lives, until, as Scripture eventually tells us, God sent them elsewhere (for example, John eventually went to Ephesus, Thomas eventually went to India, etc.).
[x_pullquote type=”left”]Jesus’ will for our lives always begins where we currently are.[/x_pullquote]
What can we glean from this? Jesus’ will for our lives always begins where we currently are. How can we conclude that we would obey God in another nation, a place that likely would be very different than our home in terms of culture and language, and thus more difficult to live and minister in than we often realize, when we aren’t willing to obey Him in our own neighborhood? Only the self-deceiving nature of pride could get lead us to that misguided thought. So no matter if you have a heartfelt longing to cross oceans with the saving message of Christ, if you don’t care to share Him at home, you can’t just flip a switch in a distant land and begin sharing Christ there.
Other ideas for reaching your context:

“Judea and Samaria” – Reaching Your Country

“The Remotest Parts of the Earth” – Reaching Every Culture

Finally, Jesus again reminded His disciples that while they must continue to get the Gospel throughout their country, He wanted them to lift their eyes to the harvest fields of the whole world. God made it clear from as early as Genesis 12:3 that one day the blessing of salvation would reach every people group on Earth (the word “family” in this verse comes from the word that modern missionaries now refer to as “people groups” – people with the same ethnicity, culture, and language). That mission didn’t change in Acts 1:8 and it continues with us today. It’s not enough to just get the Gospel to every country in the world. Based originally on Genesis 12:3, as well as Revelation 5:9, God intends every people group to have at least one person who hears the Gospel and gets saved. Some countries have a few people groups (USA) while some countries have hundreds (India, China). And there are still a few thousand people groups have NEVER HEARD OF JESUS BEFORE!
[x_pullquote type=”left”]If you’re thinking about becoming a missionary, instead of thinking about where you’ll go, think about to whom you’ll go.[/x_pullquote]
How should this challenge us to think about the world? Our vision for evangelism must be based on God’s desire for missions into every people group, not just our traditional understanding of simply evangelizing every country. If you’re thinking about becoming a missionary, instead of thinking about where you’ll go, think about to whom you’ll go. In other words, think in terms of people groups, that is, ethnicities, cultures, and languages, not in terms of locations. One day, people from every people group will worship God forever. Maybe you could be used by God in some way to help one of them hear the Gospel for the first time!
Other ideas for reaching every culture:

What are you waiting for?

Knowing all of this, what would you tell “Andrew” if he asked you? Thankfully, we can know that God will not be unhappy with Andrew (or any of us) for deciding to spend his life as a minister of the Gospel in a particular place. But we also know that God has said that He wants the Gospel to get to every people group on Earth. How do we harmonize these ideas? By remembering that just because we choose to live and serve in a particular location does not mean that our influence has to be limited to that location. If we, by God’s grace, continue to pray, give, and evangelize locally and all over the world, show hospitality to our neighbors and people from other cultures, and teach others how to grow in all these areas, we can be faithful to the purpose of God in Acts 1:8. Today, you can begin asking God to help you influence the nations from your neighborhood! What are you waiting for?
[x_blockquote type=”left”]”But you will receive power when the Holy Spirit has come upon you, and you will be my witnesses in Jerusalem and in all Judea and Samaria, and to the end of the earth.” Acts 1:8[/x_blockquote]

2 thoughts on “From Your Neighborhood to the Nations: Understanding How to Extend Our Influence”