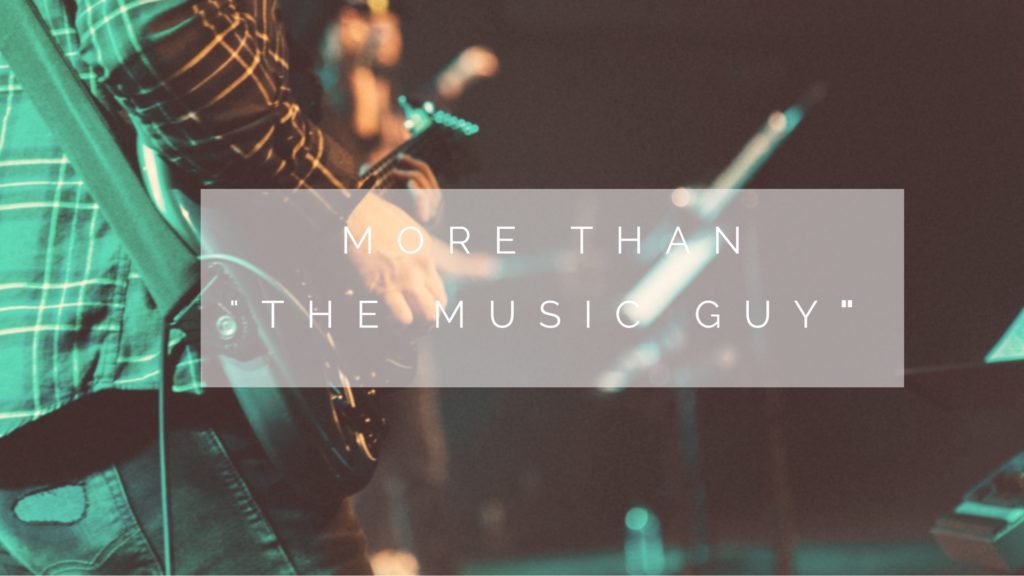 What makes you who you are?

What makes you who you are?  What defines your identity?  Is it your job? Personality? Level of education?
For Jon Hayes, it was music.
“I realized that I was really finding my worth and my value [in music], and I needed everyone around me to know that I was ‘the music guy’ all the time. And that kind of died down as far as how public I was with that, but I could still feel that desire in my heart like, ‘Hey, I can sing. Hey, I can play guitar. Hey, I write songs’. I wanted people to know that about me.”

‘Hey, I can sing. Hey, I can play guitar. Hey, I write songs’. I wanted people to know that about me.”

Jon grew up in a Christian home and came to know the Lord after hearing the Gospel presented at a Christian film festival in Massachusetts. Because both of his parents went to Word of Life Bible Institute, it was expected that each of the Hayes kids would also go to the Bible Institute for a year before furthering their education elsewhere… but Jon had other plans. His heart was set on attending a different college, yet when each of his scholarships fell through at the last minute,  he quickly enrolled at a local community college.
“I was mad at God for not letting me go to the school I wanted to go to. I became bitter. Being bitter and being in a really secular environment at the same time was a tough combination. I took a World Civilization course where the Professor would repeatedly say ‘the Bible’s a storybook, the Bible’s a storybook. All these religions are the same thing; it’s all just a bunch of lies.’ I walked away from the Lord that semester. I felt like ‘there’s no point, I’m miserable anyway.’ The Lord eventually brought me back to Himself, which I’m thankful for.”

Taking the next steps

Jon took a break from classes and worked for a semester as he thought through his next steps. When he realized he wanted to pursue the Lord and a future in ministry, Jon decided to follow in his parents’ footsteps and attend the Bible Institute.
“When I first got there I thought ‘This is crazy, these people are legalistic, I don’t want to be here. I’m going to do my year and get out of here as quickly as I can.’”
But first impressions can be misleading, as Jon soon came to find out. Interacting with God’s Word every single day has an interesting way of making someone grow up, bringing with it a maturity that overflows into the way one responds to people and situations. It brings a clearer picture of what really matters in light of eternity. “As guys, we focused a lot on growing to be mature, Biblically-minded men. This is obviously a process that will continue even after my time here, but it would have been really hard to do outside of the context of Word of Life.”

Interacting with God’s Word every single day has an interesting way of making someone grow up, bringing with it a maturity that overflows into the way one responds to people and situations.

Jon continued to learn and grow, soaking up all that his professors would teach both in and out of the classroom. “Mark Strout was extremely influential. Any class he taught became my favorite. Things I’ve known about for a long time really clicked and made sense for me in his classes. He’s made things like heaven more of a reality in my mind.”
In just a few short months, Jon’s mindset had been radically shaped by God’s Word, but he knew there was still more to learn.

A change of mind

“The Lord ended up really softening my heart towards the second year program about halfway through the first year. I was still focusing on pursuing a music career, as far as a more professional industry. Towards the end of the year, I wanted to have a missions mindset with doing music.
Most people who go to Second Year are thinking about doing full-time ministry, so it seemed like a good option. I wanted to be able to practically apply all that I had learned in my first year at the Bible Institute. Learning how to evangelize to every different type of belief out there, whether it’s a postmodern atheist or a radical Islamic type thing, was a huge draw for me.”
Another huge draw for Jon was the aspect of a Biblical community.  “You can study the same theology textbooks at home, even if you were to take 5 hours a day (like we do here) to study different books of the Bible, reading notes online and learning different things, [you could still learn a lot] but the thing that changes you is discipleship. Even beyond that, having a community of people who are being your co-laborers right beside you, learning the same things as you is so helpful.”

“You can study the same theology textbooks at home, study different books of the Bible, read notes online and learn different things, but the thing that changes you is discipleship.”

Through different aspects of his year at the Bible Institute, Jon has found that getting involved and learning from men he looks up to has prepared him for a future in ministry just as much as learning in the classroom.
“Being involved with missions and different types of ministry sometimes puts you in a position of very visible leadership. I don’t know how I would’ve learned to handle that well without being challenged as I was here. Working [in the band] with Ryan Arnold helped me understand that worship is not just something you do up on stage, but with your life. [I’m seeing the importance of] understanding the Bible and being challenged instead of just rolling over verses I had trouble with in the past, actually digging in and knowing that I need to trust the Lord, but I also need to work to understand this better. I think I’m beginning to realize that I’m not really here to simply gain college credits. It’s a great plus so that I can complete my degree later, and I’m glad to be getting some future building blocks while I’m here. But this year has made me ask all the questions that every believer should ask at some point. This year helps you to stop, turn the world down, and be able to actually understand what the Bible’s saying and build a biblical and eternal mindset.”

“I’m beginning to realize that I’m not really here to simply gain college credits. This year has made me ask the questions that every believer should ask at some point.”

While Jon has received plenty of opportunities to use his musical gifts and abilities here on campus, his perspective on music has totally changed.
“Probably about halfway through the summer, I was excited about some recording opportunities that were coming up. My best friend Mitch Carroll told me ‘Even if you made it in the music world, it still wouldn’t be enough for you.’ Ouch. The Lord has helped me to realize the truth of that, and I’ve backed off needing everyone else to know that I’m ‘the music guy.’”
Throughout these two years at the Bible Institute, Jon has come to understand that gifts don’t determine identity. His identity is found only in Christ, and he continues to use those talents and gifts to make the name of Jesus famous.
“I’d much rather be known as a guy who loves the Lord a lot, rather than just ‘That’s Jon Hayes, the music guy.”  Because I wrongly found my identity in it for so long, the music industry in a straightforward way has become somewhat stale for me; I think the Lord is working in a different direction for now.”