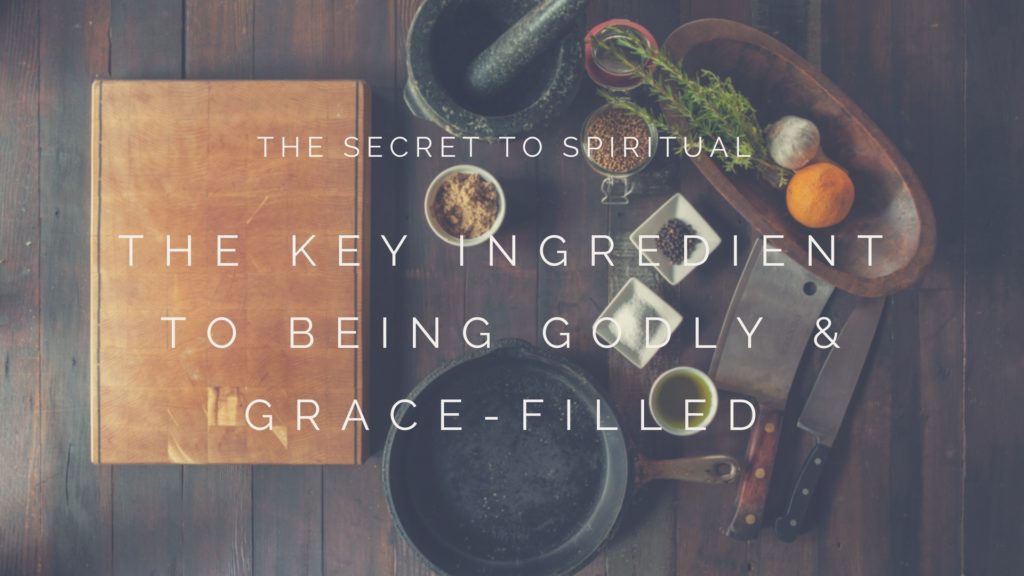 The Secret to "Spiritual": The Key Ingredient to Being Godly and Grace-filled

How’d They Do It?

What is it? What is that one secret ingredient that has caused the most spiritual believers in existence to merit that description – of being truly “spiritual”? How were they so in tune with the invisible to cause them to live the life they lived?
Of course, it probably looked a little different for every one of them. But I can tell you with confidence that there is one thing that brought every one of them to a true form of “spirituality.” It’s not a hard thing. It’s not complicated. In fact, it’s perhaps one of the simplest things there is. Alright, I’ll stop building the suspense and jump to it.

What does it even mean to “Be Spiritual”?

What Qualities Go Along With Being Spiritual?

But first, we have to ask ourselves, “What does it even mean to ‘be spiritual’?” What does that look like? I’m talking about those really “spiritual” qualities: like love, joy, peace, patience, kindness, goodness, faithfulness, gentleness, self-control.
Oh, wait. Did I just plagiarize? Because that sounds an awful lot like the fruits of the Holy Spirit in Galatians 5:22-23.
Well, it is.
In fact, I would suggest that being truly “spiritual” entails just that – that is, demonstrating the fruits of the Holy Spirit. Those are the qualities of “being spiritual.”
When we talk about “being spiritual,” I think that’s part of what most Christians actually mean. But obviously, that’s not the extent of it. We realize that “being spiritual” entails a closeness to deity.
Which brings up a relevant question. How do we get to that place of bearing those fruits? Well, from what Paul tells us in that passage, it’s safe to say that what we call “being spiritual” really means to be “spirit-controlled.”

The list of fruits is prefaced by these words: “Walk by the spirit, and you will not fulfill the lusts of the flesh” (Galatians 5:16). So, “being spiritual” is not just about demonstrating these fruits. Essentially, it’s about being controlled by the Holy Spirit.
“But that’s so abstract! I mean, if I could, of course I would ‘let the Holy Spirit control me’! But I don’t know where to begin.”
Calm down and let me tell you.

The Secret Ingredient To “Being Spiritual”

So, throughout most of his letters, Paul is almost always laying out how to “walk” or “live” by the Spirit. It’s his thing. And it is no different in Galatians.
There is one thing that Paul repeatedly lays out for how to grab a hold of this “Spirit-controlled” life: Faith.
That’s the secret. That’s the one ingredient to being godly and grace-filled.
I know, I know. It sounds like an oversimplification. But that’s exactly what Paul says. He lays out an argument just two chapters before (in Galatians 3:1-9).

Paul’s Argument: It Starts With Faith

A good example of “spirituality”

Jesus.
Just kidding. We’ll look at one that’s a little more “down to earth.” Well, ok, Jesus was literally “down to earth” when He came down from heaven. You know what I mean!

Anyways, if you look at Acts 6-7, you will see the story of Stephen. Why is Stephen so important? He was the first martyr in church history. Why is he relevant to our discussion? Well, the guy was pretty “spiritual”.
In fact, the Bible gives him really high praise in chapter six. Just by looking at verses five and eight, we see that Stephen was “a man full of faith and of the Holy Spirit” and “full of grace and power.”
Stephen was full of these…

So already, we can tell that the author of this book is setting up Stephen to do something pretty “Holy Spirit controlled.” And what does he do?
He gets killed for his faith.

Stephen: Killed For “Being Spiritual”

Stephen was so Spirit-controlled, he ended up upsetting a bunch of Alexandrians by preaching the Gospel too much. They couldn’t stand against him because of “the wisdom and the Spirit with which he was speaking.” And when they got upset, they falsely accused him and put him on trial.
And what did Stephen do? Did this guy “filled with faith and the Holy Spirit” decide he had done enough? Did he consider that ‘the loving thing’ to do might be to avoid offending these people? No. Actually, he used their traditions to illustrate the message of Jesus Christ.
Sure, he did it in a loving way. Sure, he was patient with them. Sure, he endured them. But he was so taken by the Holy Spirit and the message of grace in Christ, that the guy was fearless. He spoke the Gospel to them. And it got him killed.

So How Can You “Be Spiritual”?

Do You Need To Be A Martyr?

So am I saying that to be truly spiritual you need to go out and get killed for your faith? Well, I’m certainly not denying that. Actually, the scriptures are clear, “all that will live godly in Christ Jesus will be persecuted.” (2 Timothy 3:12 )
I mean, from what I can tell, the most spiritual people in the New Testament were killed either for their relation to Christ or because they were Him. Jesus was the ultimate servant of mankind. And He was despised, humiliated and killed. Stephen was filled with faith and the Holy Spirit. And he was put on trial and killed.
So, do you need to be a martyr? No. But you need to accept that possibility. If the Scriptures are to be believed, then you will be persecuted for living a godly life in Christ. Makes you wonder if we’re really living godly lives, eh? It’s time we become open to the fact that if we’re going to do this thing, the opposition will come.

Before being killed, Stephen chastised the Jews who were accusing him. He said, “You stiff-necked people, uncircumcised in heart and ears, you always resist the Holy Spirit.” (Acts 7:51) Be wary. We could act just like the Jews did in this situation. They had the scriptures. They had the prophecies. And yet they completely lacked faith. And how did that lack of faith demonstrate itself? They killed Jesus the Messiah and Stephen his witness. Do not resist what the Holy Spirit says to you.
Stephen sure didn’t. He practiced his faith. He heard the Spirit’s call to surrender his will. He obeyed the Spirit’s call to love. Stephen’s Spirit-produced love is no more evident than when he was stoned, as he cried out, “Lord, do not hold this sin against them.” And what does that kind of love produce? Well, at least an answer to prayer.
Think about who was among that mob that stoned Stephen. Saul. Who became Paul, Apostle of Christ.