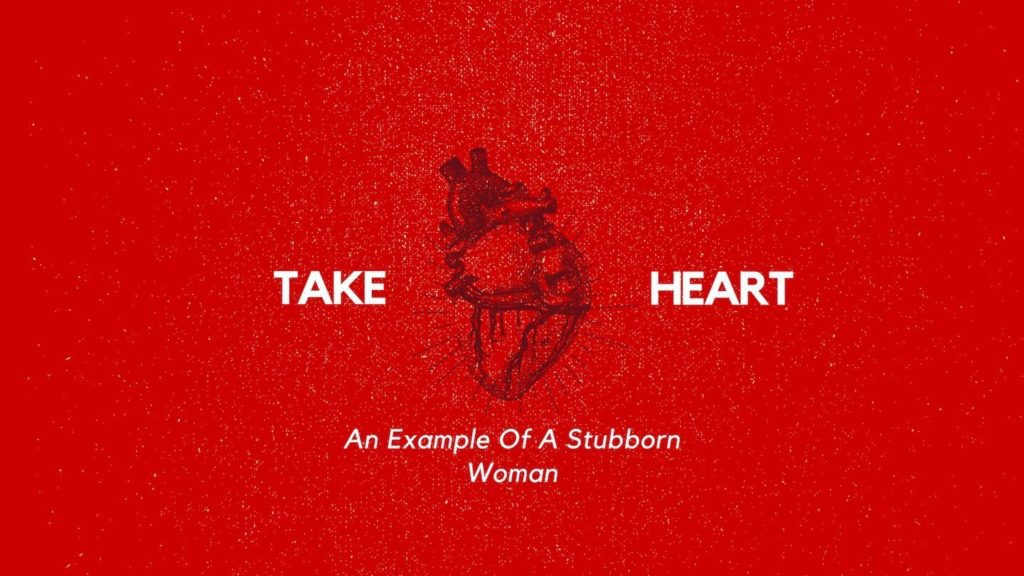 Take Heart: An Example Of A Stubborn Woman

I can be a really stubborn person. I’m fairly certain it has something to do with growing up the youngest in a family of all boys. You learn early on that “survival of the fittest” has less to do with Darwinism and more to do with competitive games with your older brothers. But I’m not complaining. It taught me that stubbornness can be a good thing if you’re stubborn about the right things. But sometimes, life just makes you lose heart. Doesn’t it? It makes stubbornness feel like an impossible feat.

Have you ever been in a situation where you’re ready to give up and lose heart? Well, I know I have. And when I’m in those situations of life, I’ve had to remind myself of one of my favorite stories in Scripture, the woman with the issue of blood.

The Most Stubborn Woman There Was

She doesn’t really have a name. “Woman with the issue of blood” is all the Bible calls her. Her story is found in 3 of the four gospels, and I think that’s important. Apparently it was a memorable encounter, memorable enough for Matthew, Mark and Luke all to record it.

In Matthew 9, picking up in verse 20, her story begins. Jesus is working his way through the crowds of spiritually and physically needy people on his way to heal a dying girl. But what happens on this journey is unforgettable: a woman is healed by simply reaching out to touch his clothes.

Vs 20, “Just then, a woman who had suffered from bleeding for 12 years approached from behind and touched the tassel on His robe, for she said to herself, “If I can just touch His robe, I’ll be made well!” But Jesus turned and saw her. “Have courage, daughter,” He said. “Your faith has made you well.” And the woman was made well from that moment.”

What Was The Issue?

There is nothing easy about this woman’s life. For twelve years, this woman’s body wouldn’t stop bleeding. Now we don’t know anything more specific than what Scripture says, and none of the Gospels give us any clues as to what the ailment was exactly. We don’t even know if she had a rare blood disease that didn’t allow her blood to clot. So she may have had open wounds all over her body. Being a woman, my mind immediately goes to worst case scenario. Dear Jesus, say she didn’t have her period for twelve years! (Cue exhaustive sigh) But truth is, we don’t know because that’s not what is important. Here’s what we do know: it was twelve years! She had even seen every doctor imaginable, spent any income she might have had. And no one was able to help her heal. For twelve years!

Step Into Her Shoes

Not only was she suffering physically, but this particular constant suffering automatically categorized her as unclean. This meant she was also cut off from all spiritual activities. For twelve years! This is compounded by the fact that anyone who made contact with her would also be unclean, she was also socially outcast….for twelve years!

Please, let this set in.

Talk about a picture of desperation! This woman was it! And when she reached him, she didn’t required an audience or Christ’s attention or even his acknowledgment. She only needed to touch his clothes, and she knew she would be well again.

And when she does this, Mark 5’s account says that “her bleeding stopped immediately” and “Christ felt power had gone out of him!” And then something beautiful happens. He turns. And this is where we see the inclination of God. She was in need and he turned towards her. Ladies, understand this: God absolutely loves us and actively pursues us. And the more we understand how much God is pursuing us, the more we will pursue him. He inclines toward us, he turns to you!

Not only does he turn, Scripture says he “sees her.” I love that this is in God’s Word because as women, we can often feel unseen. She was used to being unseen. Unnoticed. Unloved. I mean, twelve years is a long time. But Christ saw her. Through the crowd, he searched for her.

Yes. Christ sees me and he sees you as well.

Not only does he incline to us and see us, but look at this dialogue Christ has with her.

What Christ Said To Her

First, He instructs her to take courage, don’t give up, be brave, don’t be scared. Encouraging her, he says, “Take heart.”

Then, He identifies her. She’s not just a woman in a sea of crowding people. He calls her daughter. He claims her. I see you and you are mine.  Before Christ, she was just a woman with an issue, but after Christ, she has a name: daughter.

And lastly, he reminds her…your faith has made you well. Keep in mind, it had been about 3-5 minutes between the time she had touched him and was healed and Christ telling her to be brave. I love this paradox of a call to be courageous and a commendation of faith in the same breath of God. He knew. Faith in front of the most impossible odds doesn’t necessarily have to have a “brave face,” it just has to have a brave faith. It wasn’t her fearlessness which healed her; it was her faith!

This story inspires me on days when my stubbornness wanes and I feel alone as ever, ready to throw in the towel.  It serves as reminder that God inclines to us, he sees us, he instructs us, identifies us and reminds us that He absolutely loves us.

4 thoughts on “Take Heart: An Example Of A Stubborn Woman”