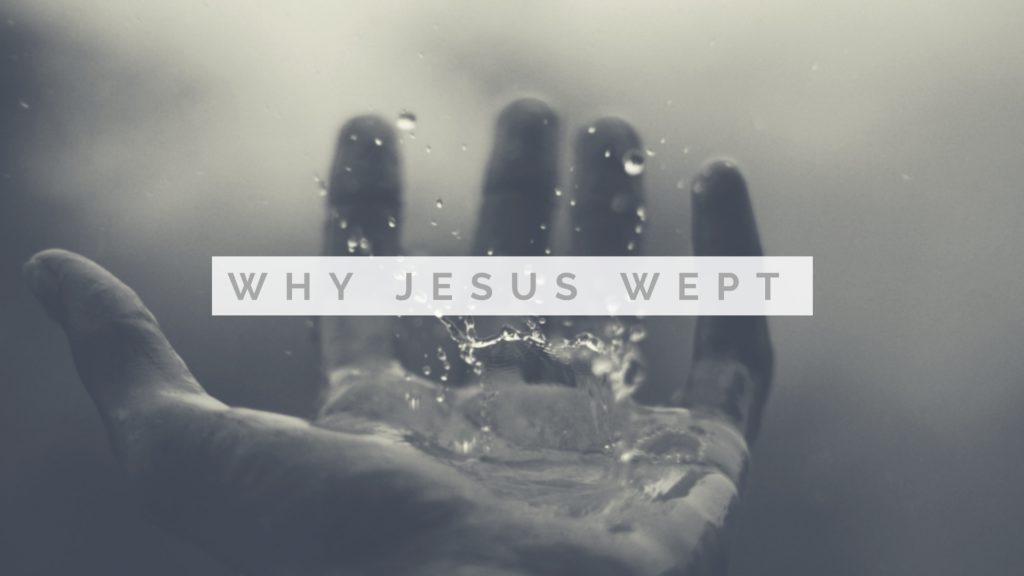 I may have heard this story a hundred times. I listened to it as a child, probably sitting on a carpet square, watching a flannel graph presentation. I heard it again as I sat through 12 years of Christian school education and studied for two more years as a Bible college student.
And yet, at 24 years old, on a rainy Sunday morning, with eyes and heart full to overflowing, my mind is blown. Clearly, Christ loved them. The depth of His compassion is so evident in the gentleness of the way He interacts with the sisters of His dead friend.
[x_blockquote type=”left”]Now when Mary came to where Jesus was and saw him, she fell at his feet, saying to him, “Lord, if you had been here, my brother would not have died.” When Jesus saw her weeping, and the Jews who had come with her also weeping, he was deeply moved in his spirit and greatly troubled. [John 11:32-33] [/x_blockquote]

Jesus knew that Lazarus was dead. He knew that in just a short time, he wouldn’t be dead anymore. Jesus knew that He was capable of miracles. He knew all would be made right again. He knew that in just a few moments, He would turn mourning into dancing. Yet even in the midst of His great power, “When Jesus saw her weeping…He was deeply moved.” And “Jesus wept.” [John 11:35]
When He saw her weeping! How amazing that a sovereign, all-powerful God is moved by His children’s tears. Was it simply sympathy? Or was He regretting the fact that He had waited so long to show up?
In the next few moments, Jesus would display indisputable proof of His deity by raising the dead back to life, yet in this moment, as the harsh reality of the death and brokenness in the world that He created and the people that He loved had hit close to home, and He felt the weight of it, just like any man would.
[x_blockquote type=”left”]And he said, “Where have you laid him?” They said to him, “Lord, come and see.”  Jesus wept.  So the Jews said, “See how he loved him!”  But some of them said, “Could not he who opened the eyes of the blind man also have kept this man from dying?”John 11:34-37 [/x_blockquote]
Was He saddened by their lack of faith in His power to heal? Was He frustrated with their lack of understanding? Or does He just hurt when His children do?
[x_blockquote type=”left”] And when she heard it, she rose quickly and went to him.  Now Jesus had not yet come into the village, but was still in the place where Martha had met him.  When the Jews who were with her in the house, consoling her, saw Mary rise quickly and go out, they followed her, supposing that she was going to the tomb to weep there. John 11:29-31[/x_blockquote]
Mary had reached out, hoping Jesus would come and heal her brother, whom He loved dearly. She had seen him heal before, of course He could do it again. She waited, yet when He came to them He was four days too late.

We are not so far removed from Mary’s questions either, are we? Where was God when ______? Why didn’t He care? Why did He just watch this happen? Or worse yet, did God even see it at all? How many times have we begged Him to show up, yet been greeted only by silence?
You have kept count of my tossings; put my tears in Your bottle. Are they not in your book? [Psalm 56:8]
How near do you have to be to collect someone’s tears?
The Lord is near to the brokenhearted and saves the crushed in spirit. [Psalm 34:18]
So, gently, near.
Jesus sees her, collapsed at His feet, overwhelmed with sadness, questioning why, and in that moment, He does not rebuke her. He does not take offense in her questions and He is not intimidated by her tears. He doesn’t correct her, or tell her to “get over it and trust God.” He cries with her.
[x_pullquote type=”left”]He doesn’t correct her, or tell her to “get over it and trust God.” He cries with her.[/x_pullquote]
What a Savior we have. What a Father we know; whose arms are strong enough to move mountains and hold back the seas, yet gentle enough to collect His children’s tears and hold them as they weep.
Yet the fact remains: If Jesus had only been here….
Both sisters greeted Him with this fact- their faith in His power strong, yet their understanding of His ways, weak. I wonder if they rejoiced at the sight of Jesus coming to their home, or if the sight of an untimely Savior just added to the hurt of it all.
“He’s too late.”
[x_blockquote type=”left”]Now Jesus loved Martha and her sister and Lazarus. So, when he heard that Lazarus was ill, he stayed two days longer in the place where he was. John 11:5-6[/x_blockquote]
He did not hurry.  He loved them, so He made them wait.
No act or choice of God is ever pointless; nothing is wasted in Him. If He had shown up that very day and healed Lazarus, I’m sure they would have been overjoyed. They would have celebrated and praised; Martha would have cooked a huge meal and Mary would sit and soak up every word her Savior said.
Yet, celebration is rarely the soil in which faith grows. Lazarus was not the first sick man to be healed, and he would not be the last.
[x_pullquote type=”left”]No act or choice of God is ever pointless; nothing is wasted in Him.[/x_pullquote]
“The afflictions of the saints are designed for the glory of God, that He may have the opportunity of showing them favor; for the sweetest mercies, and the most affecting, are those which are occasioned by trouble.”  -Matthew Henry
Because He loved them, He made them wait. He wanted more for them than they ever imagined they could have. And He knew them well enough to know exactly what they needed.

Why didn’t He weep with Martha?

4 thoughts on “Why Jesus Wept”