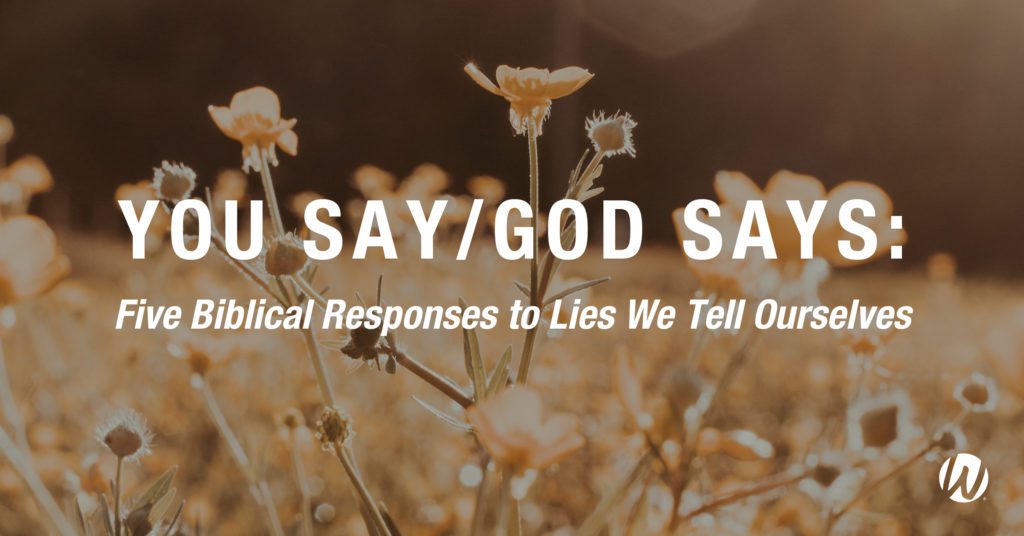 You Say/God Says: Five Biblical Responses to Lies We Tell Ourselves

Sometimes, we struggle to see ourselves in the light of truth. We look in the mirror and see someone there that lacks value, isn’t beautiful, or seems unforgivable. Satan whispers lies in our ears about the person we used to be, not the person we are now. Let’s take some of those common lies that we repeat to ourselves and bring them into the light of scripture. Who does God say we are?

You Say: Nobody Loves Me

God’s Word Says: “For God so loved the world,that he gave his only Son, that whoever believes in him should not perish but have eternal life. 17 For God did not send his Son into the world to condemn the world, but in order that the world might be saved through him” (John 3:16-17)

God loves you SO much that He gave His Son to die on a cross for your sins. Our sin causes us to be separated from God, but He was so against being parted from us that He allowed His Son to die on the cross for us! You ARE loved– deeply loved and deeply valued by God.

Over and over again in scripture, God says that He won’t leave us. In Deuteronomy 31:6-8 (just three verses!) He repeats it twice. God knows that we feel alone, but He has promised us that He’ll never turn His back on us. Take some time to pray and tell Him you feel lonely, thank Him for never leaving you, and rest in the promises He’s made. He will NEVER go back on His word, and we can trust that.

You Say: I’m Not Beautiful

God’s Word Says: “God created man in his own image, in the image of God he created him; male and female he created them” (Gen 1:27); “For we are his workmanship, created in Christ Jesus for good works, which God prepared beforehand, that we should walk in them” (Ephesians 2:10)

God is perfect, holy and beautiful. And you’re made in His image! Even though we are imperfect because of the fall, we are still made in the image of the one true God. We are perfectly handcrafted by Him for the things He has for us– good things, plans for a future and a hope (Jeremiah 29:11). Beauty doesn’t mean looking exactly the same as someone else. It’s derived from the confidence we can have in God and in knowing that He has made us exactly how we are for a reason, and there is deep, unfading beauty in that.

God’s Word Says: “10He does not deal with us according to our sins, nor repay us according to our iniquities. 11For as high as the heavens are above the earth, so great is his steadfast love toward those who fear him; 12as far as the east is from the west, so far does he remove our transgressions from us” (Psalm 103:10-12)

Because we’re sinners, we don’t really deserve to be forgiven. Even so, God doesn’t treat us like we deserve– which would be separation from Him forever. He is SO loving (see that theme repeated?) that He separates our sins from us “as far as the east is from the west”. Even if you travel east forever, you’ll never start going west. This passage is saying that when you trust in Jesus Christ as your personal savior, your sins have been forgiven on such a huge scale that the only way to imagine it is to think of them travelling away from you as fast as possible– forever. No matter who you are or what you’ve done, forgiveness can be found in Jesus.

You Say: I’m Not Valuable

The Bible Says: “29 Are not two sparrows sold for a penny? And not one of them will fall to the ground apart from your Father. 30 But even the hairs of your head are all numbered. 31 Fear not, therefore; you are of more value than many sparrows” (Matthew 10:29-31)

What Does This Mean?
This passage is a sweet one that can be held dear to the heart. In Jesus’ time, one could go to the market and buy a sparrow for half a penny. They were so cheap, they were nearly free! However, God says that not one of them dies without His knowledge and allowance of it. He cares for them deeply, and they are VALUABLE to Him! The passage continues, saying that God knows exactly how many hairs are on each of our heads, and that we are so much more valuable to Him than the sparrows are. Just because others may not be able to see your worth doesn’t mean that you are not valuable in God’s eyes. He sent His own Son to rescue you from the punishment for sin! That says a lot about how much you’re worth.

These statements and passages are not all-encompassing, but they can bring a lot of comfort in times where Satan is whispering in your ear. Trust God– He loves you, He is with you, He has made you a beautiful creation, He has forgiven you and He values you. You can confidently step forward into each new day, because you are made in His image, and you are a child of The King.